The ThreadPool in .NET 7 NativeAOT uses the Windows thread pool

Over the course of the .NET 6 and .NET 7 release, the .NET team has worked towards converging on a common C# implementation of the thread pool. The main threadpool, which handles scheduling work started with ThreadPool.QueueUserWorkItem and Task, was converted to C# in .NET 6. The I/O threadpool, which is used on Windows for asynchronous I/O and ThreadPool.RegisterWaitForSingleObject, was converted in .NET 7. In .NET 8 CoreCLR's C++ version of the thread pool will cease to exist as a fallback option.

As of .NET 7, all dotnet platforms now have a common C# implementation of the threadpool, save two platforms:

This post is about the second of those two exceptions.

Update 2022-09-19: Michal Strehovský, the software engineer on the .NET team who implemented many parts of NativeAOT and evangelized its use over the years, clarifies that the future versions of .NET NativeAOT on Windows may or may not change to use the common C# thread pool implementation. The current implementation is not a deliberate choice, but rather the state of the codebase at the time the ship deadline came.

NativeAOT (short for Native Ahead-of-time) is a new form factor of .NET that precompiles to native code. This can improve startup time and binary size. See the the documentation for more details.

One interesting property of NativeAOT when running on Windows is it uses the thread pool apis that are built into Windows. These were added in the Windows Vista, after .NET had been out for a few years, and appear to be inspired by the .NET threadpool APIs. So by relying on the thread pool already included in Windows, NativeAOT apps can save a little binary size.

Bench-marking the performance effects of different thread pools on overall application performance outside the scope of this Sunday-afternoon blog post. However there is one aspect of the threadpool that has an improved design and is easy to write a micro benchmark for: ThreadPool.RegisterWaitForSingleObject.

We can write a benchmark similar to Raymond's to observe the performance difference when using NativeAOT.

The below benchmark sets up 63,000 wait handles and starts waiting them using ThreadPool.RegisterWaitForSingleObject. The part that is actually measured for the benchmark is signaling every 63rd one. So the workload being represented here is something where you have many wait handles being waited upon and only a few of them are being signaled.

On runtimes that don't use the Windows thread pool, this benchmark causes 1000 threads to be created. The core part of the benchmark involves waking up 1000 threads.

On NativeAOT, which uses the Windows thread pool, the process creates far fewer than 1000 threads. There are just the I/O thread pool threads the read I/O Completion Packets out of the completion ports and execute the callbacks.

FYI: as of time of publishing, this benchmark does not work with any published version of Benchmark.NET. I ran against a pre-release version. 0.13.3 should have the fix for running benchmark against NativeAOT. 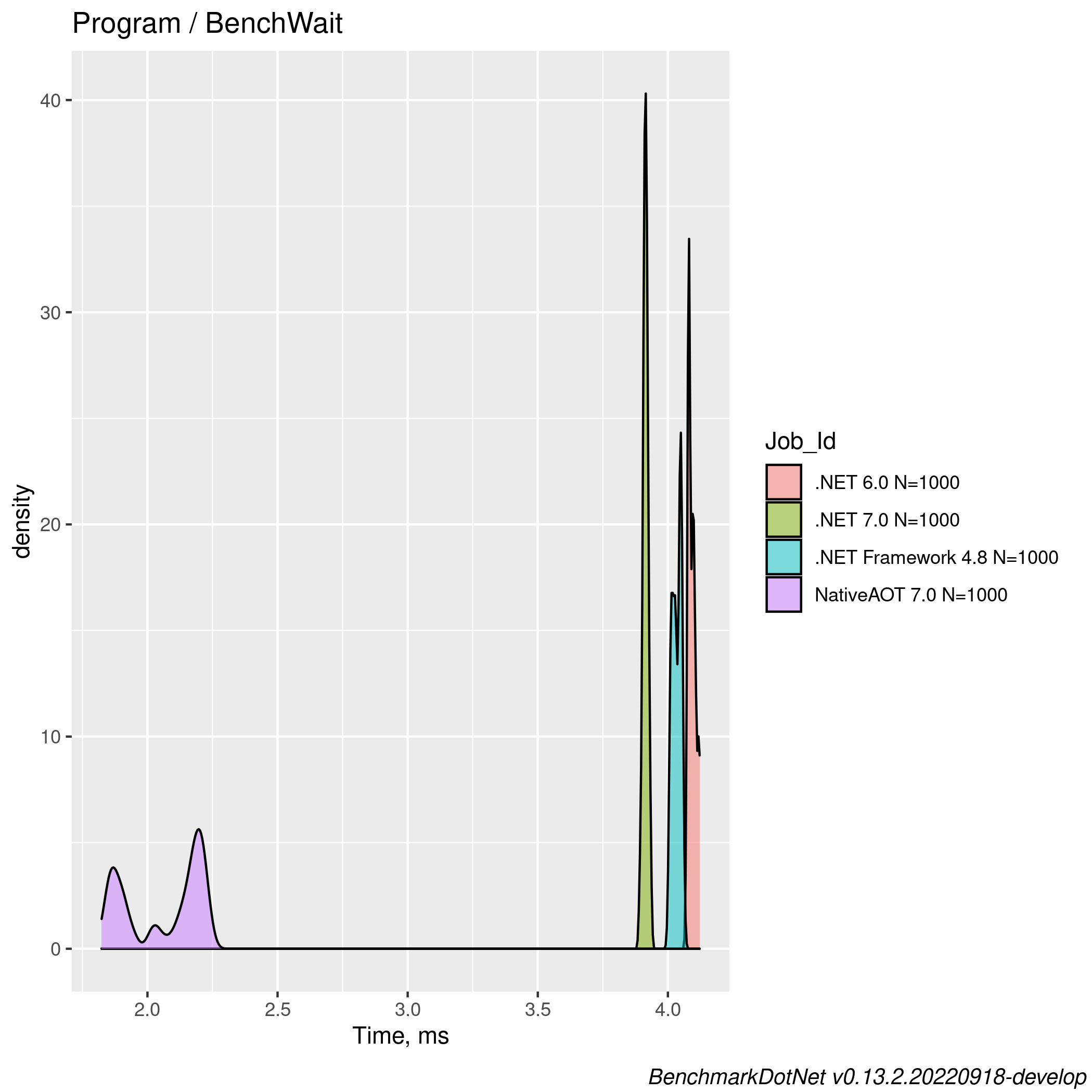 The NativeAOT version used less memory (measured as private bytes), but in absolute terms it was 10s of MiB. Obviously creating 1000 threads uses some virtual memory when creating all their stacks, but that is mitigated somewhat by .NET using a smaller 256KiB stack for these threads.

There is a quality of life improvement from not having to dig through 1000 threads when looking at a program in the debugger.

I don't claim you should make any conclusion based on this micro benchmark other than this: .NET 7 NativeAOT on Windows has a unique implementation of the thread pool, so you should keep that in mind when testing your applications.