I started an investigation of the on-disk size of different ways of deploying .NET applications exactly two years ago today. Since I just mentioned in a footnote in my previous post about the size of .NET core, I thought it would be a good time to write up my findings.

First let's start with the classic .NET Framework. We are going to count the size of the application only. This is sort of cheating, as the installer for .NET 4.8 is 116MB. But it's a good bet it's already installed on user's computers, as all supported versions of Windows 10 already include .NET 4.81. And there won't be another major version of .NET Framework.

If you do File -> New Project in Visual Studio the resulting EXE is 4.5 KB. Not bad. You can cut that down to 2.5 KB by deleting some of the attributes that Visual Studio includes by default and by setting the target architecture to X64. When you target X64, the compiler does not include the _CorExeMain stub. Not including the stub means you also not include the relocations directory, the import directory, and the .reloc section of the Portable Executable (PE) file.

To get to 1 KB, you have to drop down to MSIL. This enables a couple of optimizations:

It's small enough that we can easily annotate the different parts of the PE file. 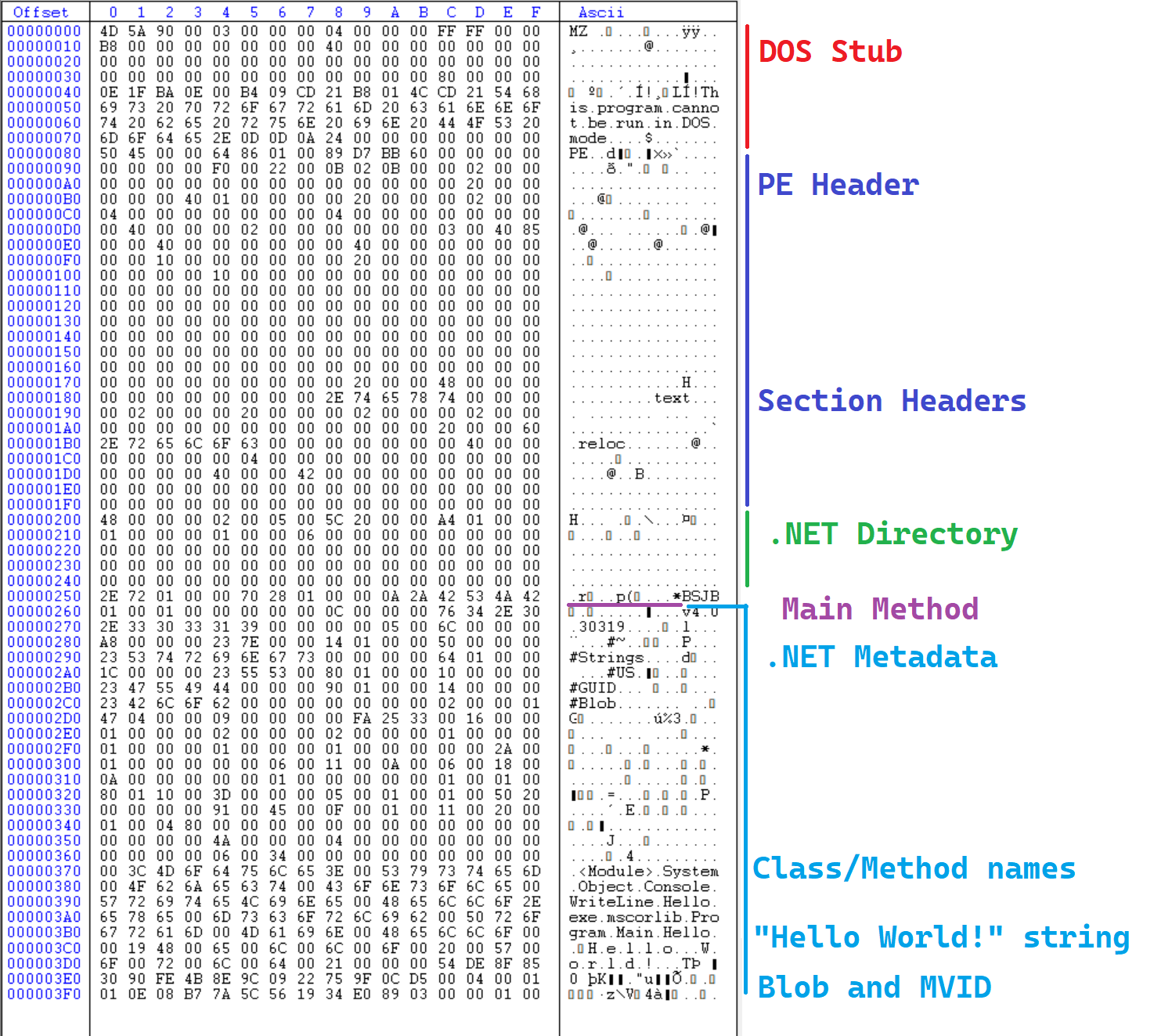 Because of the minimum of 512 byte file alignment, shrinking this further would not result in a smaller on-disk file. If you are interested in how far an PE file can be shrunk, see this article by Alexander Sotirov.

When deploying apps built on .NET Core or .NET 5 and later, we have more options for deployment. We can create a "framework-dependent" application the relies on a globally installed version of the .NET Core runtime. This is similar to how .NET Framework apps are deployed. We also have the option of creating a "self-contained" app that includes the entire .NET Core runtime with the application. This allows you to ship an application with the exact version of .NET you tested with, at the cost of increase application size.

Testing with .NET 6 preview 4, a framework dependent app is 155 KB. This bloat relative to a .NET Framework app comes from the native code App Host .exe file. This App Host exe will find the installed version of .NET Core and run the application. If you exclude the app host you can get the deployed size down to 14.5 KB, but you will have to run the application using the dotnet command:

When you deploy as "self-contained", the size balloons to 64 MB. This is because the entire .NET Core runtime is included with the published application. There are a lot of options for getting this file size down and this is were it gets complicated.

If you use trimming to remove code your application does not need to execute, we can greatly cut down the size. Our hello world application does not need XML or JSON support, so by enabling trimming, we get down to 11 MB. We can compressing the files inside the single file bundle. While this is smaller, I assume it may not start up as fast and may take more memory3. Probably the version you would actually deploy is trimmed and ahead of time compiled using Ready to Run. This version is 13MB.

To get smaller, we will have to use the experimental Native AOT version of CoreCLR. This version of .NET compiles everything to native code at build time. Following the instructions on how to build a Hello World app, we get a 4MB executable. By adding some optimization options to disable reflection and i18n we get a 1MB executable.

To go much below 1MB, see Michal Strehovský's zerosharp. By taking out everything you would normally consider to be part of .NET, including the GC, exceptions, and type-casting, you can get down to ~5KB. This is not a practical environment to write C# in, but it's interesting to see the possibilities of the Native AOT experiment.

There are many options for deploying .NET apps available today and more may be possible in the future. While the single file, self-contained option in .NET 6 is a little big, you get the advantage of controlling the exact version of .NET you are shipping to your users. It is the option I would use4 for distributing .NET 6 apps.

.NET 4.8 was first shipped Windows 10 1903. At time of writing, the oldest supported version of Windows is 1909. This is not counting Long Term Support Channel versions.

You can see in the source code for the static app host that it includes some of the contents of hostfxr and hostpolicy, which are normally separate shared libraries. Some other components for debugging are missing. See the documentation for details.

See the notes on this pull request. Depending on the operating system, some extra copying of memory is required compared to non-compressed single file bundles.

That does mean self-contained single file apps are the right choice for your use case. The Microsoft documentation goes into detail about tradeoffs between different options.